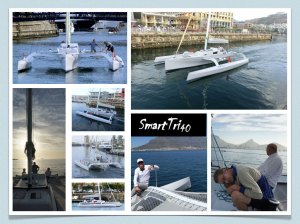 We took advantage of some uncharacteristically light conditions to install the furling screecher today. Slipping out of the marina at just after 4:30 we were accompanied by about 40 monohulls from the Royal Capetown Yacht Club. Now that’s a good 40 boats when their series has ended and things are heading towards winter! Active! Yes I think so!

The Smart Tri is an eye-catching boat especially slipping out of the marina right in front of the Waterfront which is like the heart beat of the city. Somehow the town planners have managed to keep the historical centre and mix it nicely with regular commercial port activities and the leisure industry. It has  a great fell and so nice to hop off the boat after sailing and take a leisurely stroll to some great restaurantes.

The Smart Tri cuts an imposing figure with its chiseled looks and purposeful stance. The amas (floaters) are in contact with the water to keep the platform in a float-flat attitude. The hard chine about 1/3 the way up the ama allows the floats to run as ‘wave piercers’ in most conditions and through decent waves. The amas gain in volume above the chine so as to create active reserve buoyancy when smacking into big waves or when pressed TOO hard.

The rocker line and volume distribution is about perfect. We’ve noticed no pitching when heading into waves as well as when we’ve had the boat pushing 20 knots of boat speed – perfectly level flight! The amas will absorb up to 2.5 times the total sailing load on the platform. The chine is there to give the crew a good indication of how pressed she’s getting. In normal attitude the chine will be pressed to the water, this leaves about 75% of the buoyancy in reserve. Should you push on further and harder, you might be able to get the water level up the the amas gunwhale and at that point, the mainhull should be breaking free of the water. So its forgiving but also has plenty of signals around as to how hard you going.

From the 20 knot speed we had on the second sail, we know it will take a whole lot to push this design to the edge but even when you get there, there will be plenty of reserves to ensure that things won’t get out of hand.

Danie Colyn penned the designed to not be radical but rather to be an easy platform to sail at decent speeds. Danie had long distance sailing in mind when he designed the boat but he also has a young family and so the boat had to have good manners to allow short handed family sailing. To this end it is fulfilling all the requirements with no display of unpredictable behaviour.

There are no major issue that need to be resolved just things like getting the Dyneema lowers ‘stretched’ and settled which is something that will take a little time. This is No.1 Smart Tri and No. 2 is already sitting in the molds. No. 1 is the ‘test mule’ and while everyone was expecting things to be moved or altered there is none of that required. A very good sign.

The Smart Tri was built around Danie’s frame as such she has full headroom down below from the companionway forward to the shower and head. “She had to be comfortable enough for me to move around in as well as having boiling water, an electric head, microwave and air conditioning so that you can sleep comfortably off watch.”

As a ‘test mule’ she has not been given an interior set up yet. All the systems are there and once everyone is satisfied she get a ‘racing’ interior installed. Danie’s preference is for an interior that “you can take a hose to to clean”. But as we understand it, No. 2 is going to have a nice interior installed customised to the owners tastes – now that’s nice!

But plenty of multihulls these days have the ‘niceties’ at the expense of performance so high averages was paramount for the Smart Tri. What we saw today was about 7 knots in drifting conditions so she is moving well in light airs as well as in the medium winds we saw the other day. But in preparation for the ‘standard’ South African air to return, a storm jib arrived on the dock today! South African sailors regularly have to contend with 40 ++ knots of wind and have the experience that many of us don’t. There is no doubt that the Smart Tri will be able to handle what ever is thrown at it. So it is great to see that the Smart moves along well in even drifting conditions.

Todays effort was just to get the screecher installed and unfurled in some light breeze just to check all the systems. That got a tick and so the next time it unfurls it should be in some more breeze and then the figures are going to look impressive indeed.

In Southeast Asia a long time and all the while, sailing cats. But the cat love-affair began when I finished building my first catamaran at age 15... "never again". After building 2 more Formula 16 cats in Malaysia it's really 'never again'. Now we have a large fleet of high-tech speed machines including the Nacra 20 Carbon. Then we decided to spread our wings a little more and imported the Corsair Dash 750. Now we are well on the way to establishing a Coastal One Design Dash Class. As a test bed, we had 4 Dashes take part in the Neptune Regatta and now the plans are rolling out.
View all posts by prosailing »
« Smart Tri 40
SMART power… I like these… »